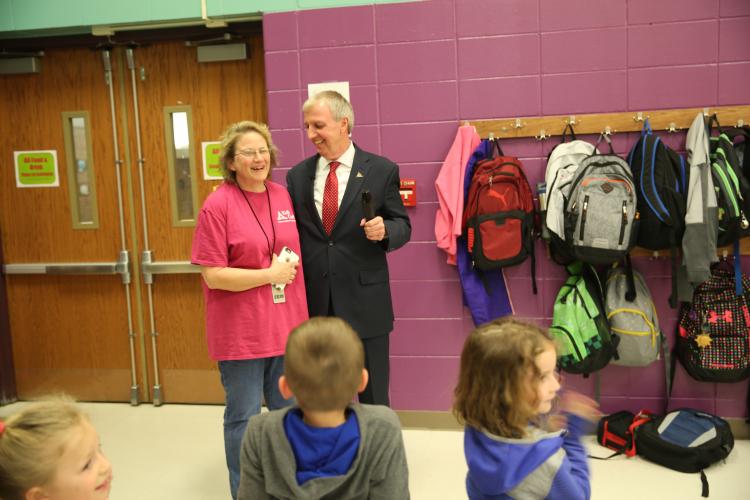 The surprise announcement was held at Horizon because Diane was Kids Club Site Coordinator there for four years before she was recently promoted to Kids Club Assistant Program Coordinator. Everyone at Horizon was happy to have her back and get in on the surprise.

Watch the video below to see her reaction when she walks into Horizon’s cafeteria to find Dr. Thacker, cameras, her family, a couple hundred students, and staff waiting to surprise her …

During her time as a Site Coordinator for Horizon, Diane implemented “After Homework Clubs” like LEGO League, Cooking Club, Helping Hands, Art Club, Tai Chi, Comic Book Club, Reading Club, Board Games Club and Knitting Club among several others. Her goal was to enhance the experience for the students by extending the academic experiences. In doing so, Diane brought about a cultural change helping Kids Club to be seen as an extension of the school. Her work at Horizon Kids Club now serves as a benchmark for the other locations.

Horizon’s Kids Club has the largest Kids Club enrollment. Students absolutely coming to the program, even over their other evening extracurricular activities like sports!

“Great collaborator, positive, kind.” “She goes above and beyond; she’s committed and gives her all every day!” These are just some of the many ways Diane’s co-workers describe her. As a true leader and role model they say she strives to make Kids Club better than the day before.

Diane and her husband, Sam, are raising their four grandchildren and have been foster parents to 10 children. She volunteers at a food pantry and is very involved with her church.

Return to School Update July 02, 2020
The communication below was emailed to staff and parents today:   Thursday, July 2, 2020   Dear P-H-M Families,   I know that you have been anxiously waiting for the details on our plan to return to school on Wednesday, August 19 (for grades 1-12) and...
Summer Math & Reading Tools
The IDOE has provided summer resources for parents to use with their children, grades 1st - 8th, to help keep their math and reading skills up over the summer.   Parents and students have access to the Lexile® Find a Book tool and the Quantile® Summer...

School Items Return & Personal Items Pickup (June 1 – 3)
We have created a schedule for parents to return school materials and retrieve student belongings as we wrap up this school year. June 1-3 are the dates parents can come to Horizon to return/pick up items.   We are NOT collecting Chromebooks at this time...
END_OF_DOCUMENT_TOKEN_TO_BE_REPLACED